Coach Dennis Erickson … Chapter College HOF Banner - CLICK FOR FULL VIEW
Former ASU quarterback Jake Plummer and former head coach Dennis Erickson were named to the College Football Hall of Fame class of 2019, it was announced Monday by the National Football Foundation on ESPN.
Plummer and Erickson join a class of 13 players and two coaches this year that’s headlined by former Texas quarterback Vince Young and USC alum and Steelers great Troy Polamalu. They are the 11th and 12th former members of the ASU football program to be named to the College Football Hall of Fame.
Plummer was a four-year starter at ASU from 1993 to 1996, amassing 8,827 passing yards and 65 touchdowns. In 1996, he was a first team All-America selection and Pac-10 Player of the Year, leading ASU to an 11-1 record and a berth in the 1997 Rose Bowl, where the Sun Devils would lose to Ohio State 20-17.
The Arizona Cardinals drafted Plummer in the second round in 1997 and played 10 years in the NFL. He ranks third in school history in passing yards and pass attempts, fourth in touchdown passes and fifth in completions.
​
Erickson was the 22nd coach in ASU history and began his tenure as such in December of 2006. In his first season, he won Pac-10 Coach of the Year after the team went 10-3 in the regular season. The Sun Devils finished No. 16 in the AP Poll that year, which was their highest finish since 1997, after the team started its season 8-0 and beat No. 18 Cal.
Erickson coached for five seasons at Arizona State, posting a record of 31-31 before Todd Graham took over. He is now the head coach of the Alliance of American Football’s Salt Lake Stallions.
The selected players and coaches will be inducted on Dec. 10. 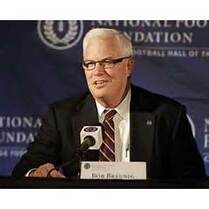 CLICK HERE
CHAPTER PRESIDENT EMERITUS ​TOM TARADASH  RECEIVES THE 2015 NFF NATIONAL CHAPTER LEADERSHIP AWARD
The Chapter Leadership Awards, first presented in 1988, annually recognize five individuals, one from each region of the country, for their commitment, generosity and leadership at the local level in fulfilling the NFF’s mission of Building Leaders Through Football. Each of the five leadership award winners were honored during the National NFF Chapter Awards Luncheon, presented by Under Armour, on Tuesday, Dec. 8, at the Waldorf Astoria in New York City.

HELP!  WE ARE LOOKING TO CONTINUE TO GROW - BECOME A MEMBER OF THE NFF
The Valley of the Sun Chapter was chartered in 1971 and is today one of the National Football Foundation’s largest and most active chapters. Our stated mission is “to honor the traditions of the game of football at the amateur level; to recognize academic and athletic excellence as well as community-school achievements at the college, high school and youth levels; and to conduct programs that further the character-building qualities of the game  and fulfill a demonstrated need, especially to the underserved population.” As a 501©(3) non-profit organization, we place great emphasis on education as it relates to effective, sports-based programming. We have been able to develop
collaborative partnerships with other groups committed to promoting amateur football in Arizona where our combined efforts result in greater impact and a higher level of success. In a single sentence, our purpose is “Making athletics better for kids, and making kids better through athletics.  Head to www.AZNFF.org to become a member
today.   JOIN OUR CHAPTER TODAY - JUST $40!  CLICK HERE  Make sure you indicate Valley of the Sun Chapter