Born Earl Robert Putman in Cincinnati, Ohio, he coached for 30 years and was head football coach at Moon Valley High School for 25 years.
Coach Putman was a championship winning athlete, a championship winning coach, and gentle giant of a man in stature, character, and accomplishments. Coach Putman's believed 'people are basically good' and his goal as a coach was 'to make young men better.' Winning was a bonus, but character building, helping young men find themselves through football, was his reason for coaching.

Selected as one of the Top 25 Football Coaches of the 21st Century by the Arizona Republic in December 1999, he was called 'a revered coach.' He had 167 wins at Moon Valley and his 1982 Rockets 14-0 season culminated in the AAA Arizona State Championship. He was named High School Coach of the Year in 1982 and 1986 and Skyline Division Coach of the Year in 1974, 1975, and 1988. He was head coach for the All-Star Game in 1981 and was honored by having the1985-86 All Star game dedicated to him. Moon Valley won the Skyline League Championships in 1981, 1982, and 1986, was AAA Arizona State Runner-up in 1986, and won the Fiesta Region Championship in 1989. He was inducted into the Arizona High School Coaches Hall of Fame in 1985 and the National High School Coaches Association Hall of Fame in 1997. He received the National Football Foundation and Hall of Fame Outstanding Coaches Award in 1987 and the Arizona Coaches Association Distinguished Service Award in 1993. Other awards included the Arizona Republic All-Arizona Special Merit/Retiree Award 1989-90 and the Arizona Republic's Outstanding Coach, Men's Sports, for 1983. Coach Putman was President of the Arizona Coaches Association in 1970-73 and remained active in that organization, the National Football Foundation, and the Arizona Coaches Hall of Fame for the remainder of his life.

A 1950 graduate of Hughes High School, Cincinnati Ohio, he was a star tackle on the football team, co-captain of the track team, and state champion in the shot put and discus, setting new state records in both events. Coach Putman was recruited by both Woody Hayes and the legendary Bear Bryant but elected to come to Arizona State on a track scholarship. He set the 1951 Border Conference Record in shot put and discus. He played football at Arizona State in the fall of 1951 and a Los Angeles Examiner article described him as 'light footed as a gazelle on the grid.' Coach Putman graduated from Arizona State in 1957 with a BS degree and in 1964 from Northern Arizona University with a Masters degree.

He was drafted in 1952 and served in the Army during the Korean War. In 1953, he was the All-Service champion in shot put and discus. And with Coach Putman and other future NFL players, the Fort Ord Warriors football team won the All-Service championship the same year. Honorably discharged from the Army in 1954 he was a 5th round draft choice for the New York Giants. Teammates there included Frank Gifford, Kyle Rote, Tom Landry (player coach), and Vince Lombardi (position coach). Following a year in the Canadian League with the Hamilton Tiger Cats, he joined the Chicago Cardinals in 1957. The Earl Putman football trading card lists him as a center for the Chicago Cardinals and 'the biggest man in pro ball.' His 6 foot, 6 inch frame at 308 pounds, size 16 EEEE shoes, size 52 jersey, 44 pants, and size 8 headgear (created by splitting 2 normal helmets and splicing them together) made him the biggest man in the NFL in 1957. Coach Ray Richards, Chicago Cardinals, said of his new center, 'amazing mobility...actually quick.'

After retirement Coach Putman continued his service to young people as a mainstay in the free physicals for teen athletes program that screens young men and women who participate in school sports (Team Osteopathic Physicals for Students). Many young lives have been saved by this program which is provided free by the Steingard Group and others and with the assistance of more than 300 volunteers. The Valley of the Sun Chapter Champions Luncheon and Top Position Player Awards are were conceived and proposed by Coach Putman, as a long time and active Member and Officer of our Board.

This award recognizes a coach who has succeeded against the odds, and has not necessarily had the winningest season. 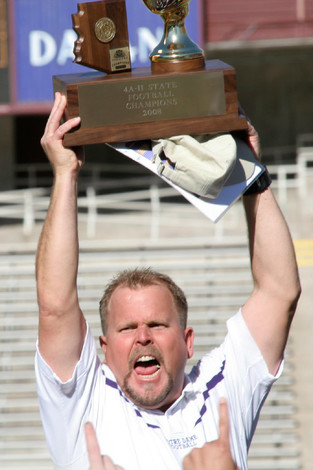 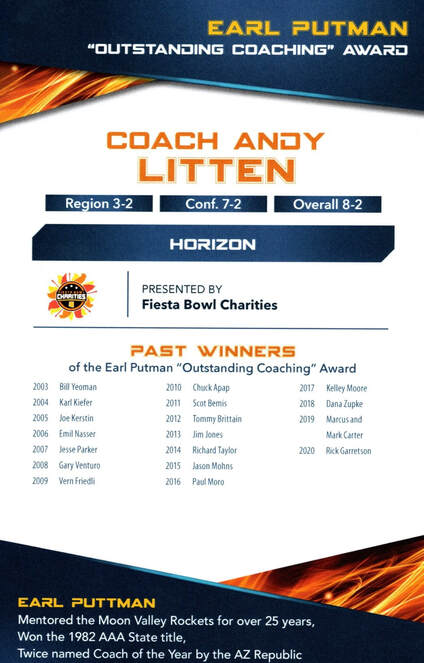 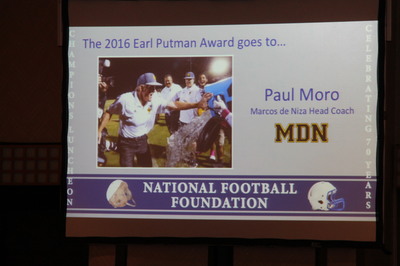 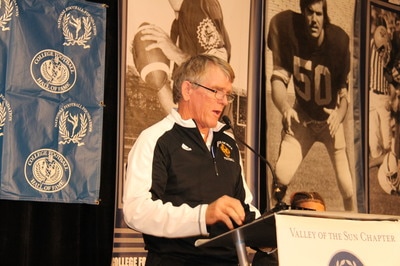 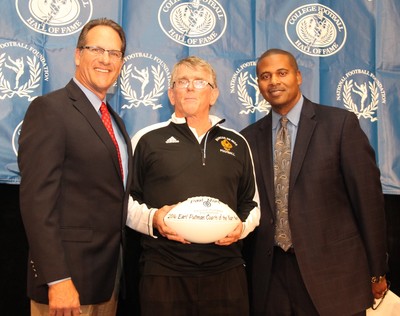 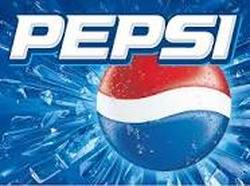 The EARL PUTMAN DEDICATED COACH OF THE YEAR  Award is Presented by: 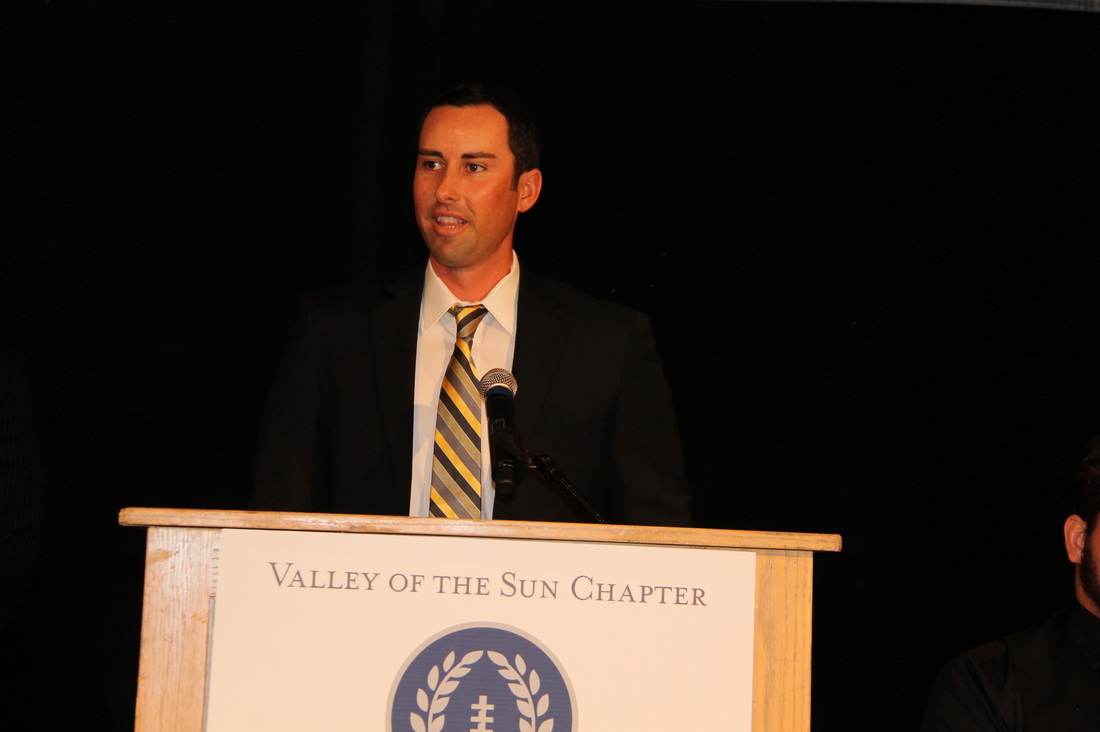